The corner site, measuring 90’x40’ was situated in a gated community in the suburbs of peripheral bangalore.

The 3600 sqft house, designed for an automobile engineer and his family of 4 had a simple brief. The client wanted the house to be an extension of his family, and a conscious effort was to be made towards keeping it economically efficient. We drew inspiration from the client`s simple and straightforward outlook and set forth.

The design intent was to keep the structure as simple as possible so that the steel and concrete costs can be minimized. The site was zoned into 3 portions, the southern being the residence, the garage to the north and a spacious garden in between. One has to navigate through the eastern wall to enter into the landscape after which the entry to the house unfolds.

The house is an economically efficient, contemporary house on a 90’x40’ plot for a family of 4 and a built up area of 3600 sft.
In contrast to the conventional method of having a continuous core for the staircase, in this house the staircase has been planned such that it the user venture throughout the common spaces as they climb the staircase thus getting a better feel of the spaces.

The southern and eastern setbacks are bounded by skylights through and through which lights up the house in a very serene manner. Apart from adding to the lighting of the house the setbacks are used for activities like hand wash and utility. It also gives the feeling of openness during day time and the user doesn’t have the feel of being in an enclosed space.

The client had a requirement that the eastern side should have no windows since there was a hostel building overlooking the house on the east across the road. So this challenge led to the amalgamation of a double height mass that would act as a skin covering the entire built-up mass in the east.

The house in itself was fragmented into a grid of 4 cubes in volume, each of which was assigned to a different space program and another 4 cubes above in which a few amalgamated to form double volumes. This geometry enabled us to provide visual connectivity between levels and gave us the leverage to push and pull cubes to make a composition visually and spatially.

A flight of stairs winds through the house unfolding spaces as one climbs. A conscious effort was made that the building responds climatologically.

All the common living spaces were designed with an open-plan idea where these spaces merge without any wall separating them. This was another conscious effort to keep the cost of the structure low. These living spaces are also strategically located to the north which provides optimum thermal comfort and the best quality of light. The common spaces are also oriented to open out to the lovely landscape.

Locally available materials were preferred as a choice for the material palette for the inside and the outside, to limit the carbon foot- print of the house. A beautiful polished kota stone flooring forms the horizontal plane of the house against the otherwise stark white verticals which act as a canvas for the play of light and shadows through the fenestration. A skin of red brick engulfs the house in the form of a boundary wall creating texture and adding colour to the house in and out. A grey solid mass towards the south contrasts against the otherwise white building. Strips of light penetrate through the slits formed by juxtaposing masses. These strips of light create a constant drama throughout the day and bring about a sense of movement in the still space. 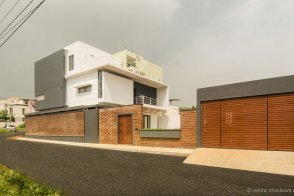 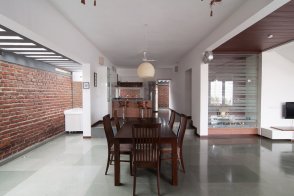 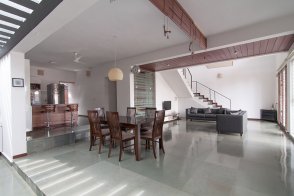 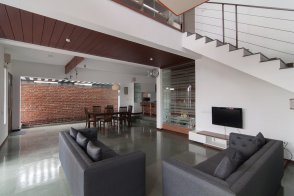 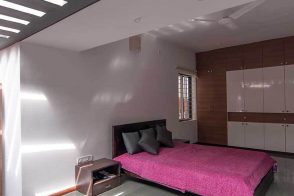 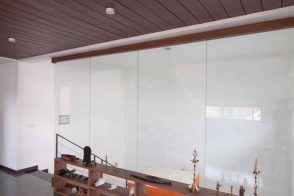 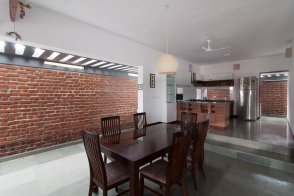 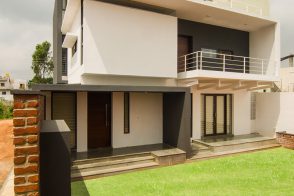 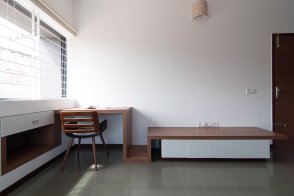